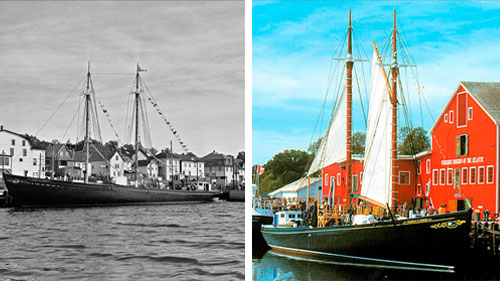 Fishing on the North Atlantic

In Nova Scotia and much of Atlantic Canada, the sea is at the heart of coastal communities. Fisheries have supported Mi’kmaq communities for thousands of years, and by the sixteenth century scores of European fishers flocked to northeastern North America to work the region’s rich fishing grounds. When Black Loyalists arrived in Birchtown in 1783, the fishery was their main economic pursuit. The fishing industry has led to the establishment of spinoff industries such as shipbuilding, forestry, and mercantile trade, and it remains an important part of our economy and diverse cultural identities.

Development of the Museum

The Fisheries Museum of the Atlantic celebrates the rich history of Canada’s North Atlantic fishery. Located in a former fish processing plant on the waterfront of the UNESCO world heritage seaport of Lunenburg, Nova Scotia, the Museum began aboard the schooner Theresa E. Connor in 1967. Since that time, it has grown to include a large complex of historic buildings, with an aquarium, theatre, exhibits and additional vessels, including the side trawler Cape Sable. Theresa E. Connor, Canada’s oldest salt bank schooner, continues as the flagship of the Museum.

Named as one of the top 1000 best places to see in the US and Canada before you die, the Museum offers a host of attractions, a maritime gift shop and restaurant. Experienced Heritage Interpreters accentuate the experience of visiting the Museum.