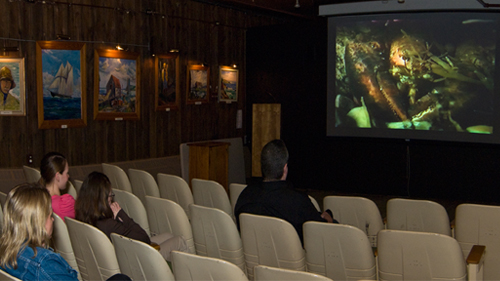 The third floor of the museum was once the ice house for the fish processing plant and today is the location of the museums Ice House Theatre.

Bluenose in the Sun – The story of Bluenose ll.

Sea Got In Your Blood – A history of the famous Bluenose and the construction of Bluenose ll.

Puffins – Land and Sea production investigating the secret life of puffins in the Bay of Fundy.

Worlds under Water – The life and times of lobsters in the wild.

The Stow Away – A Lunenburg schooner leaves for the Grand Banks with a young stow away aboard.

Rum Running – Land and Sea production, showing our local ties to the rum trade during Prohibition.

Where the Bay Becomes the Sea – The food chain and marine life of the Bay of Fundy.