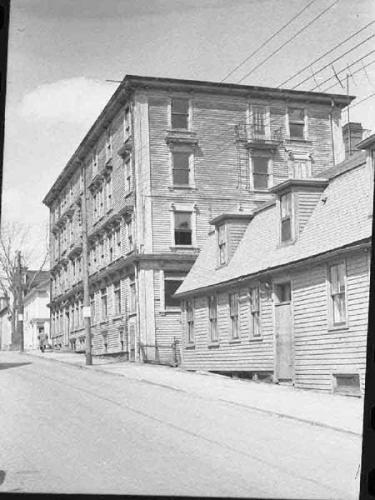 In its heyday the King’s Hotel was a reputable one, frequently undergoing renovations to maintain its grandeur. It had a lovely drawing room (lobby) in which guests could gather, a dining room that hosted many social events, a card and drawing room for guest leisure, and 28 rooms having hot and cold water. Centrally located on the corner of Pelham Street and Duke Street, near what was then the post office, telegram & telephone office, it was a mere 3-minute walk from the train station.

Built prior to 1858, the 3-storey building became the King’s Hotel in 1866 when purchased by William Henry King. The property remained in the King family until 1928, when the Lunenburg Hotel Co. took over operations under the new name, Ich Dien. Motto of the Prince of Wales, ‘ich dien’ is German for ‘I serve’. Lunenburg’s only three masted barquentine, built 1899, was also named Ich Dien.

But as times changed, so too did the role of commercial travellers. With stagecoaches and trains being replaced by automobiles, commercial travellers no longer needed sample rooms, a direct loss of purpose for the hotel. But it was not the only change to come. Ich Dien transformed from a hotel to a merchant seaman’s hostel, to a navigation school, to eventually being torn down in 1965. If there is but one guarantee in life, it is that things will eventually change.