The Sinking of Elsie Porter 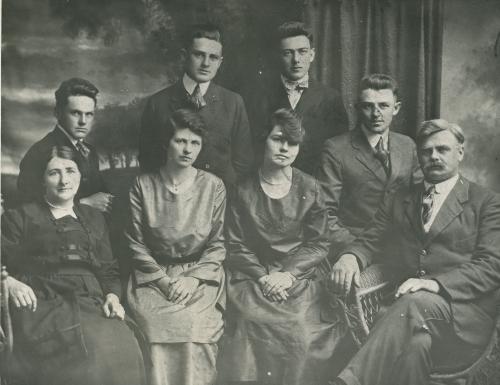 Eisenhauer family photo. Warren Eisenhauer is pictured second from the left in the back row and Capt. Irvin Eisenhauer is seated on the far right. Image courtesy of the Fisheries Museum of the Atlantic, F79.24.2

During the First World War, the dangers on the Atlantic were more than just strong winds and stormy seas- the possibility of encountering a German vessel was always just beneath the surface.

On Friday, August 29th, 1918, while returning from Georges Bank, the fishing schooner Elsie Porter was sunk by a German U-Boat.

Around 2pm that afternoon, the ship’s lookout spotted the German submarine. It was not long after that the crew was ordered to abandon ship and Captain Irving (Dickie) Eisenhauer kissed the ship’s railing, as was the tradition, and climbed into a dory with his son, Warren L. Eisenhauer. Before leaving, Captain Eisenhauer managed to grab a few things off his ship, including the ship’s flag (the Red Ensign Canada flew at the time), which he concealed in an oil skin jacket.

Thought to be useful as a pilot, Captain Eisenhauer, with his son and crew member Ferris Cross, were taken aboard the U-Boat. Warren Eisenhauer recounted, “We found the U-boat crew quite interested in who we were, what nationality ship, and what food we had on board.”

From back on the water, the rest of the crew in their dories watched their schooner sink.

Around nightfall the German crew let Captain Eisenhauer, Warren and Ferris go, and the U-Boat disappeared below the water; they were now left alone, 150 miles from land. These men used the light of their lit cigars to read their dory compass and set course for land. Cold, wet and scared, these men rowed and sailed for two and half days to Newfoundland. Eventually they were picked up by the passing ship Harry Lewis and reunited on shore with the rest of their crew.

As we reflect on Remembrance Day, let us also remember the fishing vessels and crew who were caught on the maritime frontline.

Sally Falk is Assistant Curator and Registrar at the Fisheries Museum of the Atlantic.